Hope Vale is one of the 11 communities in QRAM’s RIBS radio network  and has just appointed a new CEO.  Ross Higgins is the new man in the job and he met today with  QRAM Manager Jim Remedio at the Hope Vale offices in Cairns to discuss remote broadcasting and new initiatives that QRAM have in mind for Hope Vale Radio 107.7FM. 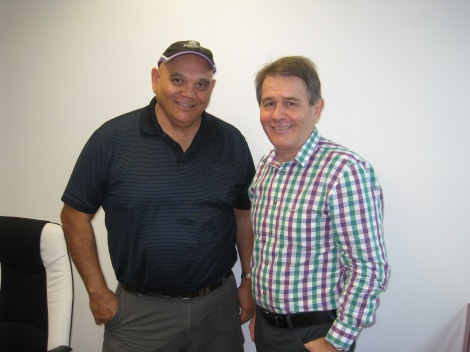 Ross is no stranger to Aboriginal communities and remote radio stations. He was CEO at Cherbourg for 11 years and also temporary CEO at Woorabinda, another community in the QRAM network. He loves radio and always has it on in the car when he is driving around the community. He hopes to work with QRAM in the upgrading of the FM service to give a greater coverage to Hope Vale and its surrounding areas.

As the community grows and businesses also grow in the Hope Vale region, so does the need to have good radio services. Jim brought Ross up to speed with plans to expand the services and also to relocate the radio antennas to the Telstra phone tower, located on a high hill adjacent to the community.  This new location is in line with the Cook Shire’s plans to eventually cover all the radio black spots across the whole of the Shire.

A microwave link from the studio building to the new site on the Telstra tower would allow the existing tower to be dismantled.  The current tower is using valuable land in the centre of town, adjacent to the present Hope Vale studio, and much better use could be made of that property.  This became really clear in 2011, when the tower collapsed, causing the outage of services in the community while it was being rebuilt.