Using this standard infrastructure, QRAM is doing something completely new for Aboriginal media in this country, especially given the challenges of telecommunications in remote areas. 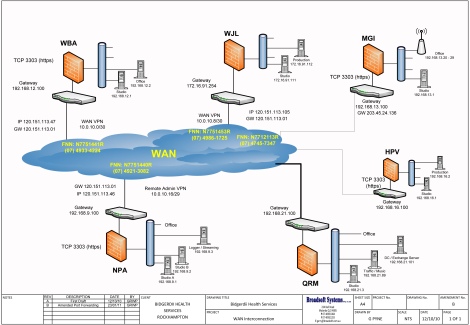 This diagram shows the concept, although only with a few of the total stations in the network.  But you’ll get the concept.

It uses the public internet, with private ‘tunnels’ that allow 2 way connection between the QRAM office and each of the radio stations, just as if we were sitting next to each other.  Using those tunnels, which only QRAM can see or access, files containing audio, images and text can be sent up and back between QRAM and stations.  New music, promos, messages, interviews and other content can be sent up to each station for playout, and each station sends a live audio stream back to the QRAM office, where it can be monitored.

The challenge has been the quality of the internet connections available at each of our 11 locations.  Standard ADSL is only available in about 50% of our communities. In other places we’re needed to work with options people in the Cape have devised to access the same online services as people in the rest of Australia. Let’s just say telecommunications installations don’t happen quickly up this way!  In one case the only option will be wireless, and that will pose further challenges.