On the return visit from Woorabinda, the QRAM service team paid a visit to Central Queensland’s only Murri Radio Station 100.7FM.

The station first began broadcasting from an OB bus supplied by ABC. Well known  Indigenous broadcasting identity Patrick Malone set up the OB and then trained up the 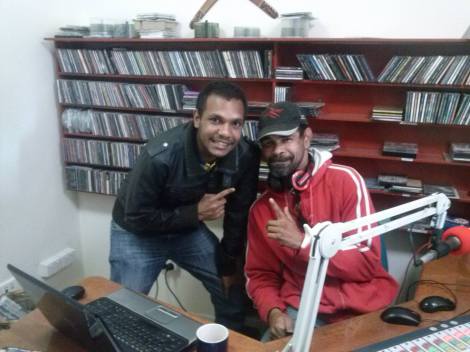 volunteers and staff for the new station which was being built.

Originally situated on the banks of the Fitzroy River, in 2005 the station was relocated to the Aboriginal Dreamtime Centre complex.

The arrival of QRAM was timely, as QRAM crew were able to do some much needed maintenance. Station coordinator Ana posted this comment on 4us Facebook:

HIT MIX WITH DANNY K: In the studio right now is Gilmore Johnston (QRAM – Queensland Remote Aboriginal Media Cairns), who has dropped in to have a yarn with us whilst in town. Also with him is Shane Gibson who happens to be an I.T. and what’d know – he’s helping with maintenance on our much need transmission box. Yehaa, awesome, just too deadly guyz!!!!

It didn’t take the crew long to get into it. Gilmore, (top left) met up with 4us broadcaster Daniel J Kielly, aka Danny K, for a yarn and to showcase  the Black Star network.  Management and broadcasting staff were impressed and eager for information on how the network works and the benefits to be gained by the smaller broadcasters, contributing to the network with programs.

The new Queensland vast satellite service  makes everyone a national broadcaster, able to participate in a broader network show case their own Black Stars and share their culture to a broader national audience.

Having the news and weather service tunnelled in to the play out system on the hour 24/7 was a talking point and was seen as a huge step forward in indigenous programming.

Shane fixes the problem at 4US

Rocky have joined a number of stations and RIBS who will become content providers for the Black Star satellite service.

Black Star satellite is a national service and can be accessed by any broadcaster with a Vast box. Simple really you just have to set your box on 920 and leave it logged on and get all the latest international and national news on the hour 7 days a week and up to 11pm at night. If you like a variety of music then Black Star is the station where you want to be.