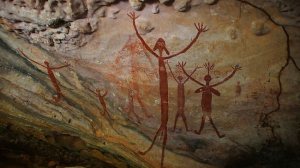 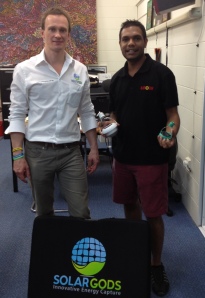 Gilmore with Spencer the solar god

These Gods are not crazy they are the solar Gods and they have the equipment that will help you if you want to camp out and travel in style.
We met Spenser Smith in the Black Star offices in Cairns. Spenser is sponsoring well known do and documentary maker Michael Butler and his wife Samantha Martin with some solar God gear as they make a documentaries in the communities of the Cape and Gulf country.

Keep your eyes out for the next series of “around the campfire with Samantha with its stunning scenery and natural environments, fascinating history consisting of 43 Aboriginal tribes at the time of European discovery, Samantha Martin will continue her ‘Around The Camp Fire’ adventures in this region of enduring Aboriginal and Islander cultures, exploring the vast wilderness of the Cape York Peninsula in this 5 part ½ documentary.

Have you ever come face-to-face with wild salt-water crocodile? Faced challenging river crossings and spend nights camping under the star-lit skies of the southern hemisphere.
Samantha has been on location at the Laura Aboriginal Dance Festivalthe exciting biennial gathering in Cape York Peninsula, highlighting the many diverse Communities, language, song, dance and stories.
This region is renowned as the site of the world’s largest body of prehistoric rock art and is rated by UNESCO in the top 10 rare rock art sites in the world. The Ang-Gnarra Aboriginal people will explain the spectacular Quinkan Rock Art sites.

Samantha will then drive north along red outback roads, explore wetlands brimming with birds and fish with some of the amazing locals. She will find locals that have an amazing story and will sit ‘By The Camp Fire’ while they tell their life story.

Samantha will try her luck at isolated fishing spots with traditional locals and cool off in pristine waterfalls, cook spectacular meals both traditionally and gourmet style with the spectacular natural scenery of the Cape York.
Samantha comes from a cattle station in the Kimberley and will join a helicopter muster then explore magnificent national parks, hike through the jungle looking for bush tucker and explore the lava tubes of ancient volcanoes and visit tiny Aboriginal communities all the way to the top of Australia.

She will stay with the people of the Injinoo at the tip of the Cape York Peninsula, then will take a boat ride to the Torres Strait Islands where 274 islands separate the Australian mainland.
Samantha will visit the Gab Titui Cultural Centre on Thursday Island for a display of Indigenous art and historical artefacts from communities across the region. It is the first keeping place for historical artefacts and contemporary

Indigenous arts from the region’s 20 island communities.
With beautiful, untouched beaches and a diverse habitat for dugongs, dolphins, giant marlin and several sea turtle species, Samantha’s visit to the Torres Strait Islands will make you think that you’ve left Australia for another Pacific island paradise.
Cape York and Torres Strait Islands are one of Australia’s last great wilderness areas and was voted number 1 on the list of…
“Things in Australia You Must Do in Life”.

Well what are you waiting around for go get a 4 wheel drive and catch up with Samantha on the track in northern Australia, and if you want one of those solar god packs visit http://www.solargods.com.au