The Black Star Crew hit the road to Doomadgee last week. This was a new adventure for morning announcer Greg Reid, visiting Gulf communities for the first time. Known locally as “The Voice of the Cape”, Greg was on a scouting trip with QRAM Manager Gerry Pyne for Black Star’s up coming live broadcast from Doomadgee on November 27 and caught up with Doomadgee’s popular local announcer Sai in the Doomadgee studios. 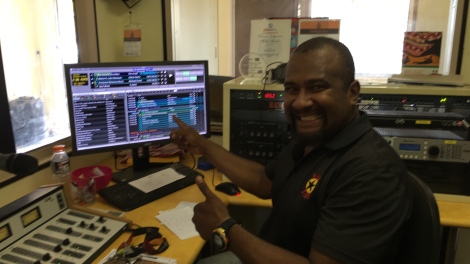 Sai in the Doomadgee studio with the new Zetta playout system

They overnight-ed at Normanton where Black Star has been on the air since April and has since become the station of choice for the town.

On the way through to Doomadgee they stopped off to sample some crocodile sausages at the Morning Glory Cafe at Bourketown. They have the best coffee in the district there!

BlackStar Doomadgee was fitted out with the latest Zetta system during this visit and Sai was amazed by the high-tech simplicity of the new system.

Storm clouds were rolling in as they began their return trip across the Savannah Way – lucky they were able to stay in front of the rain across the dirt from Bourketown to Normanton! 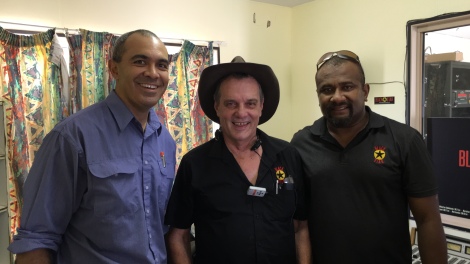 On the return trip we met with Croydon Shire Council representatives who are working with QRAM to bring Black Star to that town early in the new year.

As part of its localisation policy,  the Black Star crew will be broadcasting live from Doomadgee on Friday November 27.