Old mate Gerry and I hit the road last week to Hopevale, Cooktown and Wujal Wujal. We took the scenic route up through the Gillis Range to the tablelands to Hopevale and the scenic route back through Cooktown old Bloomfield, Wujal Wujal, Cape Tribulation across the Daintree ferry . People would only dream of such a trip, but for old mate and me it’s a normal part of the job.
At Hopevale, we put the finishing touches to the new satellite network, which will allow the local broadcaster Russell Gibson, to broadcast a 2 hour daily program on the Black Star network, which will go across 14 stations in the Cape Gulf and western Queensland. 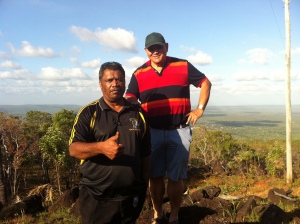 Following the Black star breakfast program, the new Hopevale program will be the first ever daily program broadcast by a RIBS service in Queensland. The program breaks new ground after a long and drawn out struggle to get a stand alone satellite service and to have program coming from other sources will make the Black Star network a premier service for the remote Queensland communities.
The Hope vale service will add localism to the Black Star network and will also be available anywhere in the country to people with a VAST black box the service is also available on Remote TV on channel 920. The service is also available for other Indigenous Stations in Queensland to add variety to their local broadcasts by taking the program off the satellite and re broadcasting on their own networks.
Hope vale is also increasing the broadcasting capacity to reach homelands in its region. We inspected the Telstra site close by to Hopevale, after a spectacular seat of the pants drive we arrived at the site up and down gullies through pristine rain forest open savannah country. 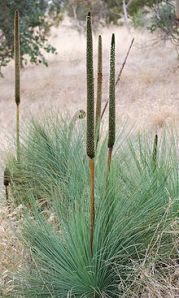 Plenty of Xanthorrhoea up this way 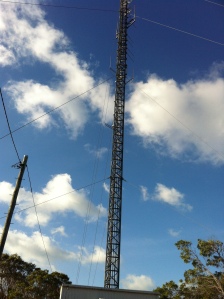 The drive had everything even saw a famous Cooktown orchid in bloom high up on a rainforest tree., and the savannah was peppered with grass trees the botanical name xanthorrhoea common in most mainland states and different varieties.
The Telstra tower is a solid structure and a service from there would give Hopevale the coverage it needs to make it a premier service in the Cape region. 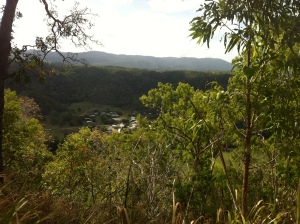 On to Cooktown, where we had a feed of mangoes and stayed the night, then next day went down to beautiful Wujal Wujal on the Bloomfield River. We also did some fine tuning there of the satellite and the broadcasters will also now be able to provide programs for the network.
On to the Telstra Tower site at Wujal where the relocation of the service is also well on the way. Following some frustrations with having to get a new Licensed Area Plan the guys at ACMA have given the all clear for a new frequency, and plans are well under way for its transfer.

The trip was a really really hairy ride. I was holding on all the way up and all the way down, the 4 wheel driving skills of Gerry(he done the 4 wheel driving course) in the seat came into their own as he manoeuvred up the gullies along the narrow ridges with what looked like a 1000 drop on either side, was scary stuff. And yes, I had to get out at the bottom to check everything was ok with my pants.
The trip ended with a drive through Cape tribulation, a few more mountain ranges and ended up back in Cairns, ready for a trip to Woorabinda next week. Who said “life was not meant to be easy”?